After spending the night in Pahrump, Nevada we packed up the car and hit the road planning to head into Death Valley via Titus Canyon. However, on the way we decided to first make a stop at the Rhyolite Ghost Town. Rhyolite was a boom town founded in 1904 around mines in the area and was home to as many as 5,000 residents before its rapid decline in 1908. The power lines and other utilities were removed and shut down by 1916 and by 1924 the last living resident of Rhyolite died making it an “official” ghost town. In the following years Rhyolite saw some sporadic activity as a tourist attraction through the 1920s-1940s, but with Beatty, Nevada close by it never saw more permanent redevelopment. Today Rhyolite is managed by the Bureau of Land Management as a site of cultural significance. 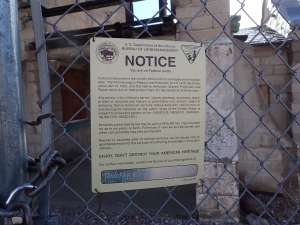 BLM notice on the fence around the old casino building.

What remains of the town today is all concentrated in a small area just off the road and it can all be seen pretty quickly with a short side trip on your way into Death Valley from the east. There is only one road in and out of the town and a small parking lot is located at the end of the road along with a restroom. 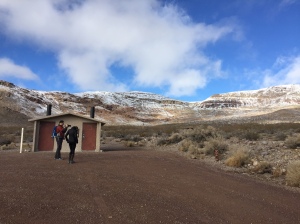 View of the parking lot and restroom.

We spent a while in town mostly just taking pictures and trying to imagine what it must have been like living in such a remote place way back when.  There may be more to do hiking related in the area but I wasn’t aware of anything and we had such a long day planned that we didn’t really try to find anything. There is also a pretty eclectic looking museum on the edge of town which seems to be a popular tourist attraction but we didn’t stop to check it out. 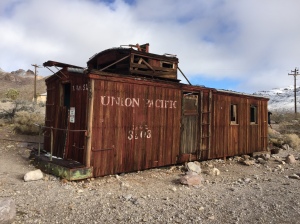 View of an old train caboose which was actually last used as a gas station.

Inside of the caboose.

The largest and most well known ruins of the original town.

Looking west towards the mountains forming the eastern border of Death Valley. 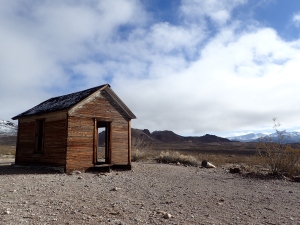 Looking out from town.

Close up view of the old casino.

Looking out over the center of town.

Looking back towards the valley from the town center.

Lego Ranger taking in the views.

View looking to the east of town. 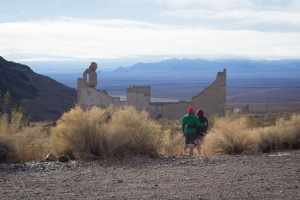 Kelly and I taking in the view from town.

I won’t go into too much detail on the town as I think half the fun is exploring it at your own pace and in your own way. However, I would highly recommend stopping by if you are in the area as it is a pretty cool place. Although don’t let the “Ghost Town” name scare you away because it really isn’t particularly creepy. Our trip to the catacombs below the Vienna Cathedral was farrrr more creepy! Either way it was a fun pit stop on our way into Titus Canyon, which really was a bit of adventure in more ways than one. Stay tuned for that post soon!