After leaving Rhyolite we headed west down Route 374 (The main road leaving Rhyolite) and in about 2 miles we reached the turn off on the right hand side for the Titus Canyon Road.  The road through Titus Canyon is a one way road covering about 27 miles through a narrow canyon on the border of Nevada and Death Valley National Park in California. The road is completely unpaved and although they list the road as being graded it is very rough and has plenty of deep ruts etc. At the very least I would say a high clearance vehicle is a must and if mud/snow is a possibility 4 wheel drive is also a must. For our trip we had a Ford Explorer equipped with 4 wheel drive and had no issues to speak of. However, I can’t say the same for a BMW x5 we encountered on the road. I should also note the road is extremely narrow in most places and it is next to impossible to pass anyone or turn around even if you wanted to so make sure you are committed to the whole journey and have enough gas etc before attempting! 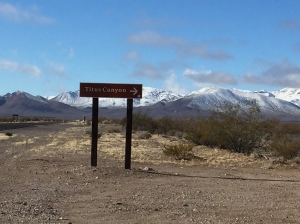 Sign marking the turn off onto the Titus Canyon Road. 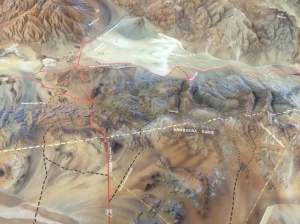 Overview of Titus Canyon from the diorama in the Furnace Creek Visitor Center.

I won’t be going into a complete play by play of the road since that would be pretty boring but I will cover the major parts and some of the more interesting encounters we had along the road.

Start of the road and probably the best maintained portion.

The road started simple enough for the first few miles over a pretty well graded gravel road. There were occasional ups and downs with small mud pits to navigate but nothing too bad. In front of us was the trusty Subaru XV Crosstrek of Stav from www.stavislost.com so we knew if his car made it we wouldn’t have any issues in our vehicle.

Following behind Stav’s Crosstrek as we approached the snowy mountains ahead.

Before too long we were getting closer and closer to the snowy mountains in front of us which capped the highest elevation point of the pass over the mountain and into the canyon. Soon the gravel was covered in snow which added a new element to the day. 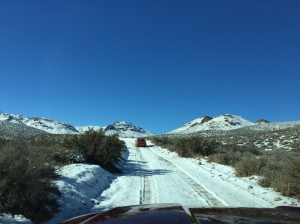 View of the road as we transitioned onto the snow.

Overall the snow cover wasn’t terrible but it was heavy enough to make things a little more slow going and the 4 wheel drive necessary in parts. Luckily being from the northeast we are more than familiar with driving on snow so it didn’t pose any major issues. I really just wanted to be careful because getting stuck out here really wasn’t an option but as we made our way up the snow covered road we ran into a BMW x5 which was stuck in a rut on the side of the road. We came to a stop and helped them push their SUV out of the snow and got them back on their way in no time at all. However, this wouldn’t be the last time we ran into them. After a few more miles of snow we reached a high spot on the road with a small cutout which gave us our first opportunity to take a quick break.

View of the snow up high on the desert pass.

Looking out over the snowy pass.

Despite the snow on the ground the bright blue sky and snow made for a very warm day out and a perfect day for shorts! Although I did get a few sideways looks from others who seemed to think I was a little bit crazy but 60 degrees and sunny is practically summer as far as I’m concerned.

Kelly and I enjoying the sunshine in the snow. 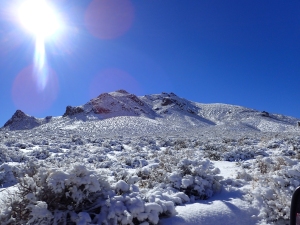 There is just something special about snow covered desert!

At the top of the pass we also ran into a group of guys on motorcycles which seemed to be having a good time and they were also the first people we saw up to this point. According to them the snow we were experiencing was a once in a decade kind of thing which made it seem all the more special. It may not be true but I like to think it is! After taking in the views we decided to get going as the drive through Titus Canyon was only part 2 of a 3 part day and we still had a hike planned for the end of the day. After our brief stop we got into the really nitty gritty of the drive which included steep ascents, descents, and steep drops off the side of the mountain pass.

From this point on I didn’t take many photos as I was pretty focused on driving and not sliding off the side of the narrow road and down the steep cliff side into the valley below. Now when I say the road is narrow in these points I mean basically only the width of the car without not much margin for error. There are also no guard rails etc so you really do need to be careful and attentive to the road. As we slowly made our way up and down the windy road through the mountain pass we ran into the BMW for a second time. This time they were stuck even worse than before and it took the help of all of us and a shovel another truck had which had passed us at the cutout to get them back on the road again. Despite the fact that their SUV had 4 wheel drive their tires were summer performance tires which offered little to no traction on the steep snowy terrain. I also think they may not have really anticipated what the conditions would be like and may have been pretty far outside their comfort zone.

After another mile or two of driving once the BMW was on its way again we ran into them again for a third time on the steep switchbacks leading up and out of the pass. On this occasion the BMW slid precariously close to the edge and one rear tire was within inches of going over the edge. Of course we only saw them once we passed a very steep corner and coming up another steep hill so I was stuck on a steep grade with no where to go and a steep drop below to my right. When I tried to put the truck in park to get out and help it began sliding backwards and luckily when I put the brake back on I was able to come to a stop. I decided it would be best to stay with the vehicle and make sure it didn’t go anywhere and let everyone else in the vehicles help them get unstuck. At this point several other vehicles had backed up in a traffic jam behind us on this precarious hill. 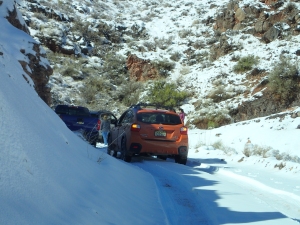 The only picture I got of the stuck BMW. You can see it just up ahead past the pickup truck.

Of course a bunch of guys in a Jeep tour thought the Crosstrek was the culprit but they were pretty amused to find out the issue was actually the BMW. Luckily before too long they were able to get going again and everyone instructed them to keep on it and not try and stop on any steep hills. Luckily this would end up being the last time we saw them on the trip. After getting up and over the switchbacks we reached the top of the pass and a steep descent down another set of switchbacks put us quickly back below the snow line and into the canyon proper. From here on out we were back to snow free gravel roads and sunshine.

The first major highlight of the road after getting through the pass is the Leadfield Ghost Town. Leadfield was a small mining town founded in 1905 and dead by the 1920’s which was founded as a result of dubious marketing techniques. None of the promises of the town ever came true and it didn’t take long for people to pack up and leave the desolate valley behind. 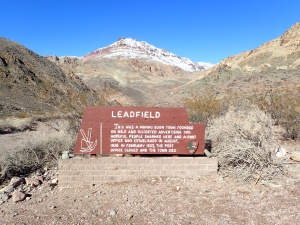 There is a small cut off where you can park and explore what remains of the metal shacks surrounding the abandoned mine. There isn’t much to see per say but it does have a pretty cool erie vibe. It was also amazingly quiet and peaceful. 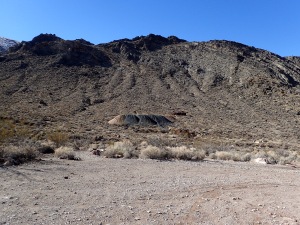 View of Leadfield from the parking area. 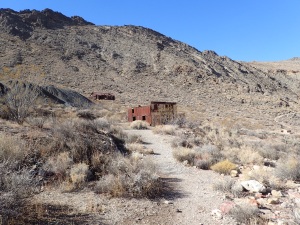 View of what remains of Leadfield. 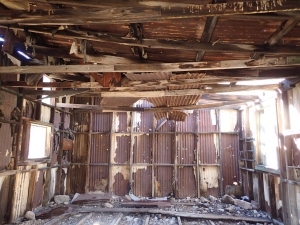 Inside of one of the buildings.

After taking in Leadfield we got back on the road and continued on our way through what was truly a beautiful landscape. Its impossible to describe just how impressive of a place it is but it is worth taking the time to drive your way so far out into the middle of nowhere. The area is also pretty amazing from a geology perspective if you are into that kind of thing. 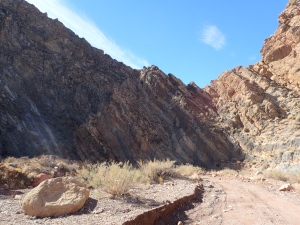 View of one of many awesome outcrops along the road.

Along the route we also saw signs marking the location of several petroglyphs along the road.

As we got deeper into the canyon and closer to the end of the road the canyon got more and more narrow. This only added to how impressive the views were and also added a bit of fun to the drive. 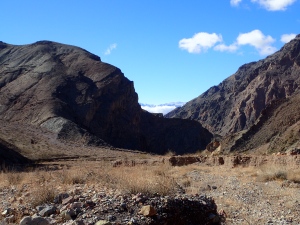 One of the last open sections before entering in the narrows portion of Titus Canyon.

The very last couple of miles of road take you through the Narrows of Titus Canyon. This is perhaps the coolest portion of the road and offers you a slot canyon like experience right from your car. It also has a fun effect of making you feel increasingly small.

View of the Narrows portion of Titus Canyon. 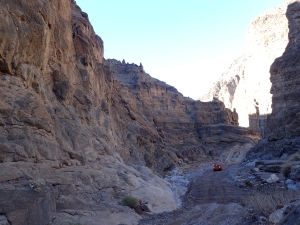 Upclose view of the road.

Before too long we reached the end of the road and came back into the sunshine and the overall grandeur of Death Valley proper. 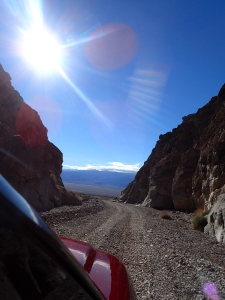 The last turn leading out of the canyon. 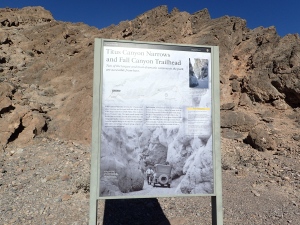 Sign at the tail end of the Narrows section of Titus Canyon.

At the end of the narrows section of Titus Canyon we came to the trailhead for the Narrows and Fall Canyon. The trailhead was small but there was plenty of space to park along the road and a bathroom. We got to the trailhead at about 2pm which left us enough time to get a hike in to a neighboring slot canyon that was a bit off the beaten trail. I will be covering our hike in my next post so keep an eye out!

View from the trailhead at the end of Titus Canyon. 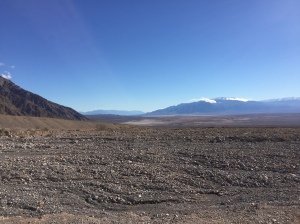 View of Death Valley proper from the trailhead at the end of the road.

All in all Titus Canyon was an awesome experience and even though you tackle it in your vehicle it still packs plenty of adventure. I would highly recommend taking the extra time to experience it if you can even though it is a bit out of the way. I have also included a short video below showing a little bit of the drive through the Narrows section.