After leaving Arizona we headed up to Zion National Park hoping to have a couple of days of hiking in what is my favorite National Park. However, just like last year, we got blocked by snow and ice which limited what was possible with a limited amount of time. Unlike last year though, we had not only snow and ice on the ground but an active snow storm to contend with. It made for a unique view of the quiet canyon but also made it pretty hard to do much of anything without committing to a long and wet day outside.

On the drive into the park from the east visibility was mostly pretty poor so we already had a good idea of what we were in for. A quick search of the NPS website also stated there had been a rock fall on the main road in the park but once we reached the entrance gate the ranger informed us it had all been cleared and the road was reopened which was good at least. The park road was mostly snow covered so we had to take it slow and steady as we wound our way down into the canyon but even with the snow and limited visibility Zion never ceases to impress. My only big disappoint was that the big horn sheep were no where to be seen on the drive in like they usually are.  Before too long we reached the large tunnel and came out to the switch backed road of the main canyon. From here the visibility was pretty bad so we only got a limited view of the expansive canyon.

View from along the park road after passing through the main tunnel. 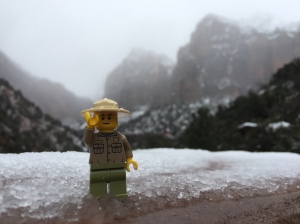 Park Rangers are a hearty bunch and not deterred by inclement weather.

Once we got a little bit lower into the canyon the snow turned into more of an icy mix which made staying outside pretty miserable, but we were determined to at least see something! So, we decided to drive down to the Temple of Sinawava which is the last stop on the park road and at least walk over to the Virgin River. When we arrived at the Temple parking area there were only a few cars and the snow hadn’t let up but we grabbed our Goretex and decided to take a walk down by the river. Just like last year there were signs warning us about snow, ice, and potential trail closures.

View of the trailhead from the Temple of Sinawava.

Caution! So far in my experience the trail down towards the Narrows has been closed every January I have visited the park.

After my first trip to Zion in August it is always crazy to see just how different this park is in the winter versus the summer. The sparse crowd is definitely the best part of visiting such a popular park in winter! From the trailhead we walked down towards the Riverside Walk trail which is really just a short walk from the parking lot.

Trail leading out to the Virgin River bank.

Down by the river the water was running pretty heavily and the water was cold and crystal clear. We hung out here for a little while just enjoying the sites and sounds of the area.

View of the Virgin River.

View of the area around the river bank.

After taking in the views we had an impromptu snowball fight with the perfectly packing snow before making our way back to the car. We were hoping the desert would deliver us from the cold New Jersey winter but instead we just brought our weather with us! After seeing what we could we decided to just head into Springdale for lunch at Oscar’s before heading to Las Vegas earlier than planned.

More views around the Temple of Sinawava.

View from the Temple of Sinawava.

Despite the bad weather there is no such thing as a wasted trip to Zion in my book. Although Kelly has told me that our next trip will have to be in the summer time so we can actually enjoy things the “traditional” way for a change. After two years in a row of bad luck with weather I don’t think that is such a bad idea.