The south rim of Grand Canyon National Park was the next stop on our trip after completing Mt. Whitney on August 10th. In all honesty after the awful sun burn I got on Mt Whitney I was not terribly excited about spending another day in the hot sun so soon but luckily when I left Flagstaff in the morning it was a cloudy and rainy day. Originally the plan was to hike from rim to river in a day but given the condition we were in and how late we got to the trail head we ultimately decided against it.

The drive from Flagstaff to the Grand Canyon was beautiful but uneventful. It is nice that driving from this direction gives you no indication of what you will see when you arrive at the visitor center which makes for a very nice effect. We arrived at the visitor center at around 10am and were greeted by overcast skies but luckily no rain. The clouds were actually a nice relief for my sunburned skin so I was not complaining! We set to figuring out a plan for the day and decided on hiking down the South Kaibab Trail which is one of three major trails which lead down to the river. However, before we got started we made sure to walk along the rim trail directly next to the visitor center to get our first views of the canyon.

First view of the Grand Canyon from the vistor center.

Like many places throughout this trip, pictures do not do justice to the scale and majesty of the Grand Canyon. It is so large and expansive that it is easy to get overwhelmed when looking at it. You almost get the feeling you are staring at a painting because the size and scale are so large that it is hard to comprehend. This is probably the best and most enjoyable aspect of visiting the Grand Canyon and it is great that it can be experienced by anyone by simply driving up to the visitor center.

After gathering our gear for the hike we loaded onto the shuttle bus for the quick trip over to the trail head for the South Kaibab Trail. The trail itself leads all the way to the river below, but it does also have intermediate stops along the way which are suitable for short or longer day hikes. However, the park service is also quick to remind unwary visitors that hiking from the rim to the river in a day is extremely difficult and time consuming and should not be attempted. This sign at the trailhead illustrates the parks position.

Quite the ominous warning!

We decided once we arrived at the trailhead that we would just keep hiking until we got bored or felt satisfied and would just turn around at that point. The longest point the park recommends for a day hike would be Skeleton Point which makes for a 6 mile round trip day hike. We figured if we didn’t feel like going down to the river and back we would use this as our turn around point.

The trail itself is well maintained and was busy at the time we started down it. The only major draw back to this particular trail is that it is also used by guide services which use it for donkey rides into the canyon so you do have to keep an eye out on your way down and up for all of the gifts left behind on the trail by the animals. The sites and smells do detract from the experience and in retrospect we should have just commited to a longer day and one of the more scenic and less traveled trails.

The first views as you begin to walk down the trail.

The views are magnificent from top to bottom along the trail but unless you go deep into the canyon they do not change dramatically. This is not to say that they are not worth it though! The trail itself winds its way along a ridge that takes you slowly deeper down into the canyon. 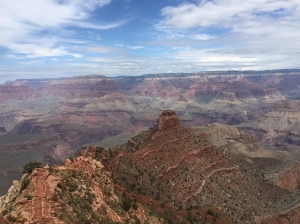 You can see the trail winding its way along the ridge.

After about 1.5 miles of hiking you will reach the first major stop in the trail which is Cedar Point. At this location there is a stop for the donkeys headed down the canyon as well as a bathroom.

After passing through here the trail became more and more deserted as it seemed most people used Cedar Ridge as their turn around point. There is also another nice viewpoint on a small bluff on the side of Cedar Ridge.

After another 1.5 miles we arrived at another great viewpoint at the end of the ridge seen in the picture above that offered excellent views in every direction. We decided we were not committed to continueing down to the river so we stopped here to enjoy the view for a while before heading back up to the trail head.

The hike up was uneventful and went very quickly. Once we arrived back at the trailhead we opted to walk the 2 miles back to the visitor center along the paved rim trail instead of riding the shuttle. This proved to be a good choice and I would highly recommend this to anyone as the views are equally great and since it is a pave trail it is accesible to everyone.

All in all we had a nice day out at the Grand Canyon and I am glad that we took the time to stop here on our way to Zion. The views are breathtaking and easy to access so it is no wonder this is one of the most popular National Parks to visit. However, I will note that if you are looking for a more authentic outdoor experience you should consider planning a longer trip into the canyon or at the very least consider doing one of the less traveled trails such as the Hermit Trail instead.

We left the Grand Canyon in the afternoon and made our way to Page, Arizona where we would spend the night before arriving in Zion the following day. Also,  as a side note I would add that the drive from the Grand Canyon to Page is also quite beautiful as you drive through beautiful canyons and desert as you pass through the Navajo Nation.