Trailhead: Parking near the snowplow turn around on the south side of Rt 3

I managed to get 2017 started off right with a trip up Vly mountain in the Catskills totally up and down on Skis! Luckily the area got a little bit of snow so I was able to break out the skis and make it happen. I started by parking on the south side of Rt 3 near the snowplow turn around. It is easy to know where to park because the road ends at the snowplow turnaround where they stop maintaining the road. You just want to be sure not to park in the snow plow turn around or blocking the driveway of the neighboring property. Also as a side note, in the warmer months Rt 3 continues up and over the mountain on an non-maintained road, that to my understanding is perfectly legal to drive over. However, after skinning up the road I’m not sure how great an idea it would be without a capable truck.

View of my parking spot near the snowplow turnaround.

View of the snowplow turnaround and start of the non-maintained road/trail.

After packing up my gear and grabbing my skis I walked up to the start of the road. Luckily there was a couple of inches of fresh snow covering a hard packed base and I was able to get on my skis right from the very beginning.

Start of the hike up the road.

The road starts at about 2,500 feet in elevation and carves a relatively straight upward path up the side of the mountain to the top of the ridge. The grade is also pretty gentle which makes for a pretty casual trip skinning up the road. Along the way are short flat spots following a few steep sections which also give you a chance to catch your breath and keep hammering up the hill.

View of the road as you continue your way up.

After about a mile on the road I reached the crest of the ridge and the road flattened out as you approach a private hunting cabin at a large intersection. The cabin was unoccupied at the time but plenty of signs marked it as private property so you want to be sure to respect the rights of whoever it is that owns it. 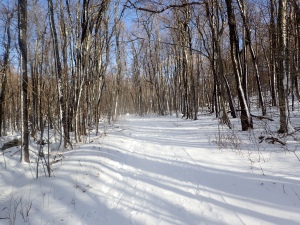 View of the road as it flattens out as you reach the cabin.

View of the cabin off to your left.

View of the large intersection at the cabin. The herd path for Vly starts off to your right.

Once you reach the large intersection with the cabin you can take a left down the snowmobile trail to head over to Bearpen Mountain (another Catskill 3,500 ft peak) or hang a right towards Vly. I decided to start with Vly since it was likely to be the hardest since it is listed as an “unmarked” herd path. Although in practice this isn’t really true because there are blue blazes on the trees marking the trail all the way to the summit. From this point the trail was not broken out at all and I got to ski on nice deep and fresh snow on my way towards the summit of Vly. The herd path for Vly starts off to your right, across from the cabin, and just left of a DEC sign on a nearby tree.

The herd path for Vly starts just left of the blue blaze on the tree.

The herd path from here is fairly easy to follow since there are blazes but there is also a pretty clear path of least resistance through the tree. There were also signs of people having come this way recently which made it even easier to follow. The path was a little tight on skis in spots but I was able to make pretty quick progress without too much trouble. I was determined to do as close to 100% of the hike on skis as possible.

Looking down the start of the herd path.

After hiking for a little while I reached the first of a couple steeper rock sections where I was forced to take off my skis and scramble up the icy ledges. I forgot to take a picture of one of the larger rock sections but it isn’t anything too crazy. I was able to do it quick and easy enough without micro spikes on my boots. 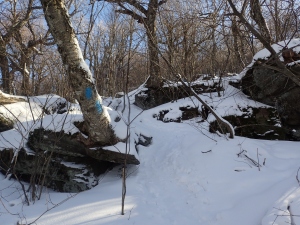 View of one of the small icy sections on the trail. I forgot to take photos of the larger rock sections unfortunately!

Between rocky sections I was able to make quick progress on skis on the mostly flat herd path. The herd path traverses the ridge which overall is quite mellow and mostly flat except for a few short sections. Also as you near the summit you get a mostly obstructed view looking back towards the summit of Bearpen Mountain. Unfortunately the summit itself is wooded and does not offer any particularly great views.

Looking back towards the summit of Bearpen.

In what seemed like no time at all I reached an area with low hanging, dense vegetation, followed by a small clearing that marked the summit of Vly.

Looking down one of the flat sections of trail approaching the summit of Vly.

The summit itself is fairly unimpressive and wooded, but there is a canister on a tree marking the summit where you can sign in and record your ascent.

The summit of Vly Mountain and summit canister on the tree.

I was lucky enough to get the very first entry of the new year!

View of the summit canister. 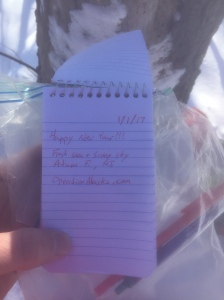 After having a drink on the summit I made quick work of the trip back towards the cabin and trail junction. The trees are fairly dense so unfortunately there is no real opportunity for quick downhill action (at least that I saw) but it was still pretty fun. There are also sections of deep snow off to the sides of the trail which could be fun, but I was alone, and not confident of what was hiding under the snow, so I wasn’t trying to be too adventurous. As I headed back to the cabin I could also hear what sounded like a stampede of snowmobiles zipping around in the distance so I was a little bummed out about what I was going to find once I reached the cabin. However, once reaching the cabin I still tried to head over towards Bearpen.

View of the snowmobile trail heading towards Bearpen Mountain.

I made it to the start of where the trail narrowed into the woods and it was fairly wet and completely bear rock. 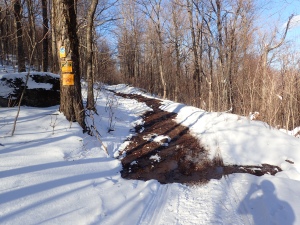 View of the snowless trail heading towards Bearpen.

I think I could have gone around this particular spot and back onto the snow, but the sound of snowmobiles in the distance did not make me excited about what the condition of the trail would be. I also wasn’t stoked on the idea of possibly getting run over around a blind corner, so I just made the choice to call it a good day and head back down. The trip back was fairly uneventful but the nice fresh snow on the road got pretty destroyed by the snowmobiles heading up and turned it into a large minefield of rocks. I still managed to ski it back down without eating snow but not without my skis taking a bit of a beating. I was a little bummed out about the conditions in the end but all in all it was a great outing for so early in the season so I am not complaining! Can’t wait to make it back to the area and maybe finally finish up my Catskills list this year. I have been putting it off but it is still something I would like to do at some point. Hopefully the snow conditions continue to shape up this year!