Thanks to the upcoming holidays, Stav is back in town for a little while so we decided to take a short trip over to Harriman to catch up.  We decided to do a short loop starting from the Reeves Meadow Visitor Center and hiking over the Ramapo Torne and Russian Bear. The visitor center was pretty busy when we arrived and we had to park along the road at the end of the line. 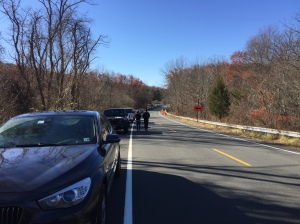 View of our parking spot.

We then walked over to the Visitor Center which was where the trailhead was. As a side note the bathrooms at the visitor center are now closed! 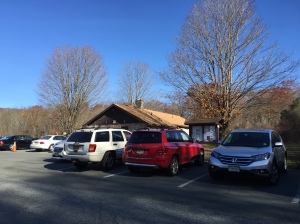 View of the Visitor Center.

From the visitor center we followed the red marked Pine Meadow trail on the right side of the parking lot. I have hiked this trail before and covered it in other trip reports but this was the first time doing it from this particular direction. 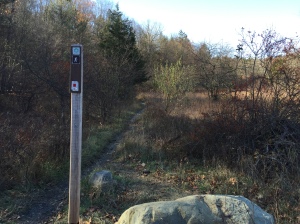 Start of the trail from the parking lot.

The trail started out on a wide and mostly smooth trail as we covered the small rolling hills leading away from the parking lot. 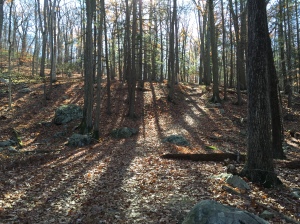 Start of the Pine Meadow (R) trail from the parking lot.

After a little while the trail began to get increasingly more rocky as we approached the sides of the cliffs and ridges that make up the hills of Harriman State Park. The trail was covered in a thick layer of new leaves but it was well marked and still pretty easy to follow. 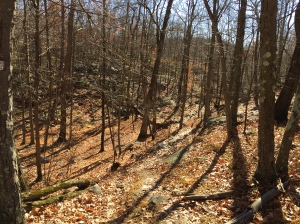 Before too long we reached the first trail junction of the day with the Orange (O) marked H-T-S (Hillborne-Torne-Sebago) Trail. From here we hung a right and continued down the trail towards the Ramapo Torne. 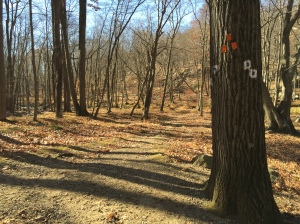 View of the first trail junction.

From here the trail leads you through a low lying swampy area as you approach the base of the Torne. However, the trail sits up on slightly higher ground so it is not particularly muddy or hard to follow. 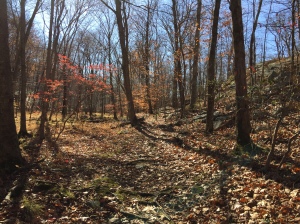 Before too long we reached the second junction which is marked by an arrow and leads you up the rocky cliffs of the Ramapo Torne. This section of trail is also an old road so you need to be careful not to miss this junction and continue down the road. 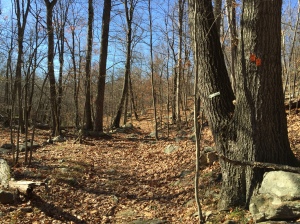 View of the second junction leading you towards the Ramapo Torne cliffs.

A short distance up the trail lead us to the base of the first set of rocky outcrops that we had to scramble up. I am hesitant to call them cliffs because I do not want to make them sound any harder or scarier than they actually are. 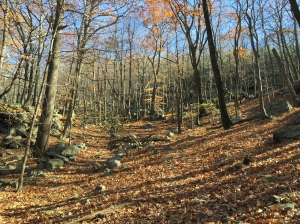 View of the trail as we approach the side of the Ramapo Torne. 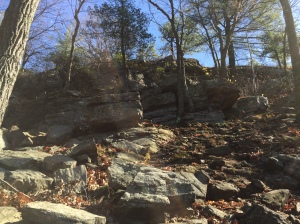 View of the first rocky scrambling on the trail.

We quickly made our way up and onto the ridge via easy rock scrambling and were rewarded with our first views of the day. The leaves are pretty much all gone at this point so the view has become more of a winter scene. Now all we need is fresh snow!

First view of the day from the Torne.

After taking in the view we continue on our away along the top of the ridge trail. 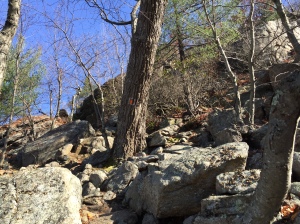 Nearing the top of the rocky ridge. 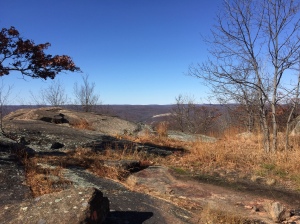 View from the very top of the rocky outcrop.

The trail from here had a lot of different paths but they all force you in the same direction so just be mindful of the trail markers and you shouldn’t have any major issues with navigation. 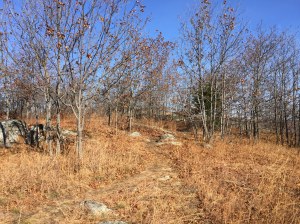 View of the trail on top of the Ramapo Torne. 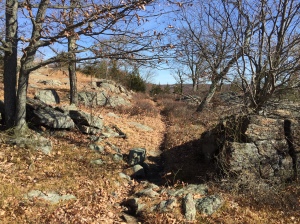 More views further down the trail. 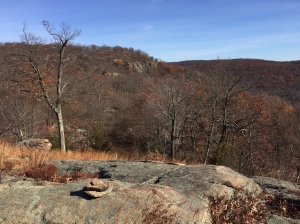 View of the Russian Bear in the distance.

From here another short section of trail put us at the bottom of the Russian Bear. These cliffs are fairly large for the area but the trail actually follows a path around them but not up them. We spent a little bit of time exploring what routes may be found going straight up the cliffs but decided against trying any of them on this particular day. 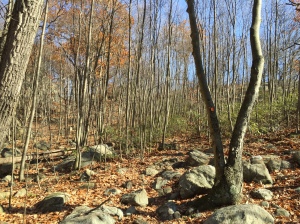 View of the trail between the Torne and Russian Bear. 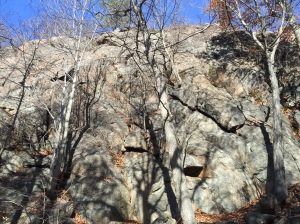 View of the cliffs of the Russian Bear.

Once we reached the top side of the Russian Bear we got some nice but mostly obstructed views of the surrounding area. 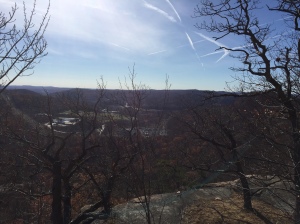 Mostly obstructed view from the top of the Russian Bear.

We didn’t linger on top but instead continued on our way down the trail. 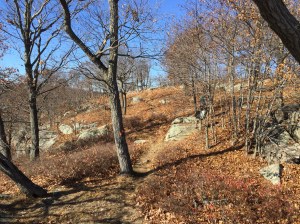 View of the trail leading away from the Russian Bear.

Before too long we reached the next junction of the H-T-S (O) and Black (Bl) marked Racoon Brook-Hills trail. From here we continued straight down the orange trail. 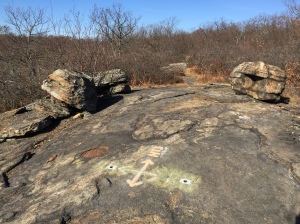 View of the junction with the black marked trail.

From here the trail continued on the ridge before combining with the blue marked Seven Hills Trail which is still one of my favorite places in Harriman. However, it looks quite different without all the dramatic fall foliage I observed a couple of weeks ago. 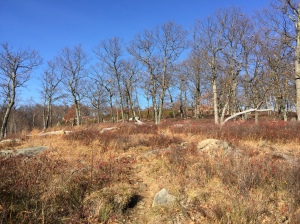 View of the trail following the junction. 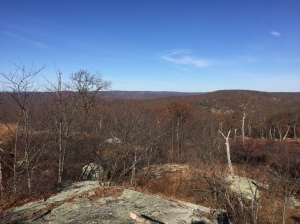 View from near the high point of the ridge. Sadly the beautiful red carpet was gone from my last visit. 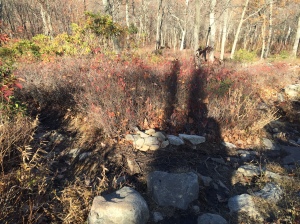 View of the very easy to miss junction of the blue and orange trails.

From here another short section of downhill trail placed us at the junction with the red marked Pine Meadow Trail which would lead us back to the parking lot. 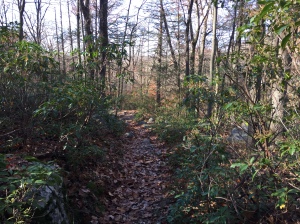 View of the trail heading down to the red marked trail.

The descent down the trail went quickly and before we knew it we were at the junction with the red marked Pine Meadow trail. From here we hung a left and followed the red marked trail all the way back to the parking lot. 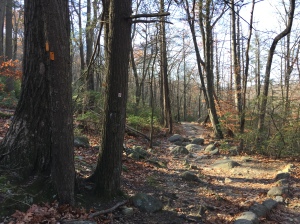 View of the final trail junction with the red marked trail. 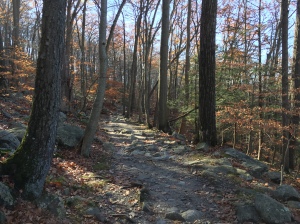 View of the red marked trail heading back out to the parking lot.

The remaining hike out was uneventful and we reached the parking lot in what seemed like no time at all. This particular hike wasn’t very long but it was still enjoyable and an easy recommendation if you are looking for a fun option in the area. Stay tuned to the blog for more posts from other areas in Harriman State Park and all around New York State and the US in general!