Well I have been extremely busy lately but I am determined to finish off the write ups for my Europe 2016 trip! Next up on the agenda is Verona, Italy where we decided to make a stop after leaving Ravenna on our way up to Lake Garda in the Italian Alps. Originally we had no plan at all to stop in Verona but after getting a suggestion from the hotel staff we decided to make a stop since it was directly on our way north. It turned out to be a great suggestion and it was a shame we didn’t have more than a few hours to enjoy it.

We arrived in the city at around noon and after finding a parking spot we began our exploration. The city itself was pretty packed, especially in contrast to Ravenna. The first thing we passed when entering the old city from where we parked was the location of “Juliet’s balcony”. This is the balcony associated with the play by William Shakespeare, Romeo and Juliet. This is one of the most popular tourist attractions in Verona but in reality it just struck me as an overly crowded tourist trap as it is fictional place from a fictional story, but people seemed to enjoy it so who am I to judge. 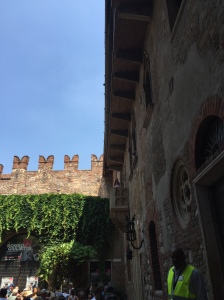 The city itself is also steeped with history and in the sidewalk in the old city was an opening which showed some of the old foundations of ruins underneath the existing city. It is interesting to see these small windows into the past under your feet. It is especially interesting to see how time has impacted the elevation of street level as subsequent generations have built on top of what came before.

A window into the past of Verona.

The next major attraction we reached in the old city was the main square, the Plazza Delle Erbe. The plaza is mostly just full of souvenir shops but there are also quite a few restaurants to choose from, which is exactly what we did.

We found a restaurant that seemed to have great service and great food, and we certainly made a great choice. The other interesting part about this restaurant was that it had traditional dishes such as horse and donkey. 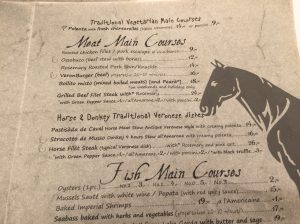 Yes, you read that correctly.

Now I’m not entirely sure if what we ate was actually horse or donkey because it honestly tasted just like beef, and if no one told you otherwise I doubt you could tell. It is always fun to try traditional dishes when you are traveling abroad. I also had the best lasagne I think I have ever had at this restaurant. So if you are ever in Verona I suggest you try out the “Tetta di Giulieta” restaurant (yes…that is really what it is called).

After a delicious lunch we continued our exploration of the city. We walked to just about everything we could find in the old city, including on the other side of the river which sepearates the main old city from the rest of the city on the other side.

Another small plaza in the old city.

The river itself was also very beautiful and reminded me a lot of being in Florence. There wasn’t much we saw over here but the walk around the river was pretty worthwhile on its own. We also passed in front of the old Roman Theater.

Looking at the old Roman Theater from across the river.

One of the several bridges crossing the river.

Looking at the old city along the river.

Our trip to verona also would not have been complete without visiting at least one church in the city. The main church of the city was occupied with a wedding ceremony so unfortunately we weren’t able to go inside, but right next door is the Chiesa di San Pietro Martire (St Peter the Martyr), which is another church originally built in 1321. This church was complete with frescos dating back to the middle ages which are very well preserved. This is especially surprising when you consider that this church was once used to house supplies and troops by Napoleon Bonaparte. 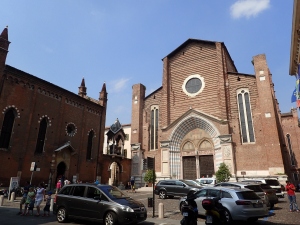 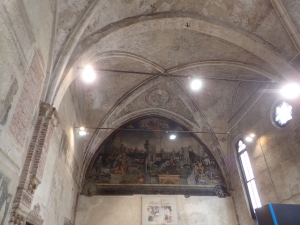 View of frescos adorning the church.

Close up of one of the frescos.

Since we were losing daylight we didn’t have much time to do much else in the city but walk around a little more, and of course enjoy some gelato. After enjoying our delicious gelato we went to another side of the city to see the ancient Roman amphitheater. The amphitheater is still in use today for shows and since it was so late we didn’t go inside but it was still pretty cool to see. It is much smaller than the more famous Roman Coliseum but still very well preserved. This part of the city also has most of the fine shops and restaurants you would expect to see in big cities like Rome or Milan.

View of the street near the Roman amphitheater.

After this last stop we called it a day as the sun was setting over the city and made it back to our car for the drive up to Lake Garda in the Italian Alps for our next stop of the trip. Verona was an awesome city and I hope to one day have another chance to spend more time there. I would highly recommend stopping for a visit if you ever find yourself in the area!