Hike stats at a glance:

Cloudy with temperatures in the 40’s

With only a few peaks left to finish up my 46er journey the name of the game on this day trip was efficiency. My goal was to hike Big Slide in the morning and then drive over to the ADK Loj in order to do Street and Nye in the afternoon, and I am happy to report that the mission was accomplished! With these three peaks done I now sit at 44/46 and am on track to finish them all up in the next couple of weeks.

I drove up from New Jersey Friday night and arrived at the Garden parking lot at about 10pm and was lucky to snag one of the last spots in the lot. This lot is notoriously crowded so I knew if I didn’t arrive the night before the odds of getting a spot were next to zero so I was glad it worked out. I set up my luxurious sleeping accommodations in my Subaru and turned in for the night, and despite the chilly near freezing temps I was able to get a restful nights sleep.

I awoke bright and early at 6am to the sounds of other hikers setting off for the day and knew it was time to get started since I had a busy day ahead of me. I broke down my bed and got my gear packed up for the day and signed into the trail register at 6:30am. It was a cold morning hovering around 40 degrees and despite starting in the dark I felt refreshed and ready to go. This parking lot is most commonly used as a jumping off point for points throughout the Great Range but the trail leading to the summit of The Brothers and Big Slide starts right from the parking lot near the register. 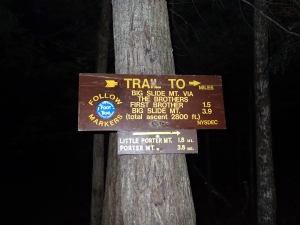 Sign marking the start of the trail from the parking lot.

The start of the trail is pretty uninteresting as it winds its way up a mellow incline on your way to the summit of The Brothers en route to Big Slide. Shortly after setting off you also come to a trail junction marking the split either towards The Brothers or Porter Mountain. I stayed to the left and continued my way towards the First Brother. 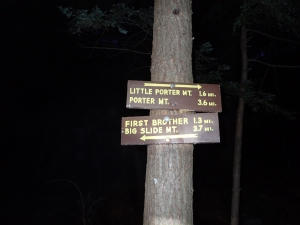 I made quick work of this part of the hike and before I knew it I was at the first mildly steep section of trail which lead to the slabby ridge of the First Brother. By this point the sun was also starting to come out so I took a minute to take off my jacket before continuing up onto the slabs.

Start of the slabs leading up the brothers.

You can see the worn path leading over the rocky slab.

I knew that this was supposed to be a nice hike but I honestly had not really looked it up so not knowing what to expect I was pleasantly surprised by the diversity of the hiking on Big Slide. It offers a little bit of everything you will see around the High Peaks but in one neat package. The slabs also offered fantastic views that are hard to beat. It also didn’t hurt that I made it to the slabs just as the sun was starting to rise from behind Giant casting beautiful light and shadows over the foggy valley and colorful fall foliage.

Sunrise over Giant Mountain in the distance.

Continuing along the trail over The Brothers.

Fog rolling through the valley below.

On this particular day the fog obscured most of the views of the Great Range beyond but it did not really detract from the experience as it created a very beautiful scene. The trail along the slabs itself is easy to follow and is a nice change of pace from constantly trudging through the wooded trails of the area. As I made my way over the First Brother en route to the Second Brother I encountered some short areas of rock scrambling as well which only added more fun and variety to an already fantastic day in the mountains. 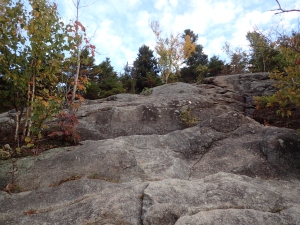 Rock scrambles along the way.

More scrambling as you make your way up to the top of the ridge.

The Brothers are a lot of fun to climb in their own right and only add to the fun of doing Big Slide which cant be said for every smaller peak in the High Peaks area that you are forced to climb on the way to loftier summits. Also although it may look like a challenging climb you shouldn’t be overly concerned as the rock is very grippy and there are tons of ways to get up each section of rock without having to do any actual climbing. I would just be sure to be careful in some spots if the trail is icy at all because it does get awfully narrow in spots.

Narrow section of trail along the way.

Once I reached the top of the ridge after passing the summit of the Second Brother I was mostly in the clouds for the rest of the morning. Once I went over the top of the Second Brother I dropped down into a small col along the ridge heading to Big Slide. At this point I was hiking through the fog in typical High Peaks trail conditions. The trail was not particularly steep or challenging but there was a bit of water and mud in several places but I wasn’t surprised considering the rain that had fallen all week prior to my hike. 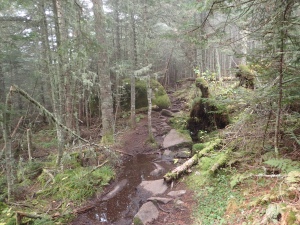 As I neared the final stretch of steep trail to the summit of Big Slide.

I made quick work of this section and quickly arrived at the final trail junction which marks the 0.3 mile trail to the actual summit of Big Slide.

Junction marking the way to the summit.

I passed this point and continued up the trail for the final 0.3 miles to the summit. At this point the trail gets significantly steeper and I also encountered the first ice of the season for me. The trail however was not particularly icy so it only served to make the surroundings more beautiful. Since there was no real ice to really contend with it wasn’t much of a chore getting to the top. There is also a short series of ladders leading up a particularly steep section. The final section of ladder is missing a couple of rungs but its still sufficient to get the job done.

Short section of ladders near the summit.

Ice build up the trees but thankfully not the trail quite yet.

The ice created a nice atmosphere on the summit.

Once I passed these last few steep sections I came out on to the semi exposed summit of Big Slide. The summit itself is rocky and trees obscure your view except on the side facing the rest of the Great Range. I was hoping to have some incredible views but the clouds were not really cooperating with me. I stayed for a few minutes to try and get a great shot but alas it was to no avail. I made it to the summit at 8:32am.

The best view I was able to capture from the summit.

It was a bit cold on the summit so I did not linger too long after I realized my photo was not going to happen. I back tracked the way I had come and made quick work of the descent. Once I got near the summit of the Second Brother I crossed paths with the first person I had seen on the trail all day. The way down was uneventful and once back on The Brothers I was back bellow the clouds but they still had not cleared up totally out of the valley. Although I really wasn’t disappointed after the gorgeous sunrise I had seen just a little while earlier. Once I got over the first Brother for the home stretch back to the parking lot I passed droves of people heading up the mountain. I am glad I got an early start and was able to appreciate the views without the large crowds.

I made it back to my car at 10:05 and quickly packed up so I could head back down to the ADK Loj for the second part of my day which I will include in a separate post. Big Slide was a great hike and I will definitely be making it a point to make it back in the winter to do it again soon.